Drivers on I-35 use ramps to access mainlanes and frontage roads. Some of the existing ramps do not meet current design standards and others pose access challenges due to their location. Potential solutions under consideration include:

The combination of these modifications will improve mobility and safety along the corridor.

In some areas, like downtown Austin, the entrance and exit ramps do not meet current design standards. They are too short, steep, curved or close together for optimal performance. Some exit ramps end too close to heavily congested intersections, which force drivers to make sudden movements between frontage road lanes after exiting or cause ramp traffic to back up due to frontage road congestion. Mobility35 proposes to modify ramps in these areas to:

To improve safety on I-35, TxDOT is installing high-mast lighting, an advanced illumination technology, as part of the Mobility35 Program. Conventional highway lights are typically 50 feet in height and include one to two light fixtures. This requires more poles spaced closer together to properly illuminate the roadway. High-mast lighting can reach up to 150 feet in height and uses six LED bulbs, reducing the number of poles needed and improving visibility. This type of illumination improves safety for roadway users, requires less long-term maintenance and reduces light pollution along the I-35 corridor.

Several Mobility35 projects include high-mast illumination, and it will continue to be used in future projects. For more information read the High-Mast Illumination fact sheet. 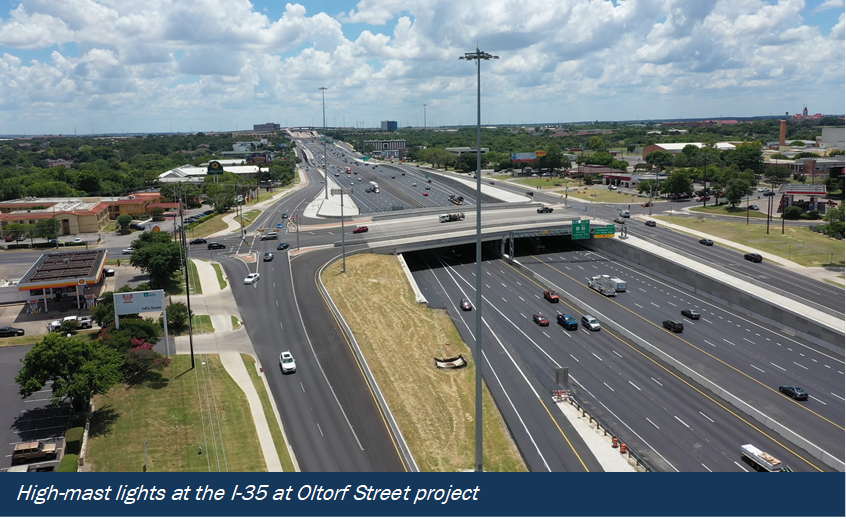