New Merging Technique to Be Tested on I-35

The Waco District will soon begin testing a new way for I-35 drivers to merge with another lane of traffic near construction zones — when traffic begins to back up. Experts say it could save time, increase safety and lessen road rage.

Officially, the technique is called Dynamic Late Merge (DLM). However, some states where the merge method is being used refer to it as a "Zipper Merge." Here's how DLM works: When a construction zone forces the closure of a lane and congestion has formed, drivers tend to move into the open lane as soon as possible to make sure they have their spot in line. This creates a long backup in the open lane and leaves the other lane empty. 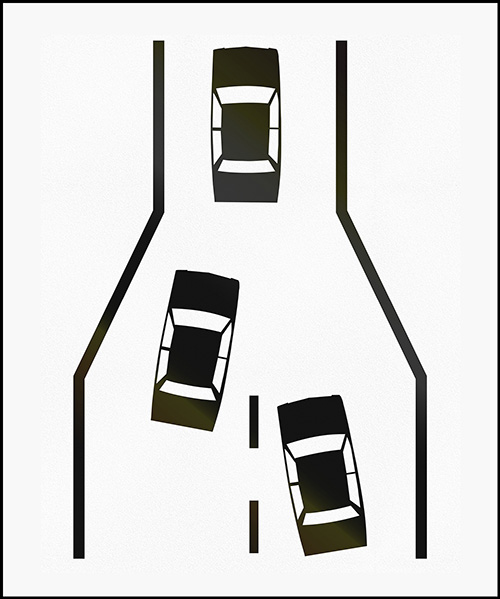 With DLM, drivers are instructed by dynamic message signs to remain in their lane and proceed until they reach the merge point. Then the motorists in the open lane and the closed lane take turns merging into one lane and traveling past the work activity. If the traffic queue eventually dissipates, sign messages encouraging the late merge strategy turn off, allowing drivers in the closed lane to merge over into the open lane as soon as they prefer. | View the Missouri Department of Transportation video explaining the technique

"Dynamic Late Merge, or Zipper Merge, is being used by other states, and we believe it has several potential advantages over the way most of us are accustomed to driving in work zones," says Jerry Ullman, the manager of the Work Zone and Dynamic Signs program at the Texas A&M Transportation Institute (TTI). "Instead of queuing up in a single line, the DLM technique encourages the use of all lanes until the merge point. This reduces the overall length of the queue that develops, tends to be safer, and it helps reduce road rage at the merge point."

In fact, it was a road-rage study conducted by TTI researchers in 2000 that led to the first short-term testing of DLM in Texas more than 15 years ago.

"In that study, the act of merging was cited by study participants as the number one cause of road rage," explains TTI Research Engineer Scott Cooner. "So, we began looking for ways to lessen road rage and decided to give DLM — or Zipper Merge — a try. It was implemented in a few locations in the Dallas District more than a decade ago. Zipper Merge was in place for about a year at one of those locations, with positive results."

Electronic signs will alert drivers to a lane merge ahead and instruct them what to do at the merge point.

Researchers say that drivers adjust quickly to DLM and realize its benefits of improving traffic flow. TxDOT may begin using the strategy as soon as this spring, with construction projects in Temple being the most likely candidates.

"Because DLM is new for most drivers, there will be a slight learning curve," explains TTI's John Habermann, I-35 lead mobility coordinator. "We'll use several dynamic message signs, some well in advance of the construction zone. The first signs will indicate 'Slow Traffic Ahead,' and 'Use Both Lanes.' As motorists get to the merge point, the sign will alternate between 'Merge Here' and 'Take Turns.'"

Habermann says that because construction zones are slightly different, not all of them are candidates for DLM. "It's our goal to have the most efficient highway system possible. We think DLM will help us achieve that objective," he says.