A Diverging Diamond Intersection (DDI) is a new intersection design that addresses congestion by allowing vehicles to travel more quickly through an intersection. A DDI works by creating a diamond-shaped pattern in the intersection that temporarily shifts traffic to the left side of the roadway prior to entering the intersection. Two-phase traffic signals are installed at the roadway crossover points. Once on the left side of the roadway, vehicles can freely turn left rather than waiting for oncoming traffic to clear or for a left-turn signal. Through-traffic on the frontage road is handled via a collector-distributor road, or intersection bypass lane, and proceeds straight through the cross-street intersection allowing vehicles to avoid the traffic signal. Benefits include improved:

A DDI is now open to traffic in Williamson County, replacing the traditional intersection at I-35 and RM 1431. A DDI is under construction in Travis County at I-35 at Parmer Lane and being considered for the intersection of I-35 at Airport Boulevard.

Watch the DDI explanatory video to see how it works. You can also read the DDI fact sheet to learn more. 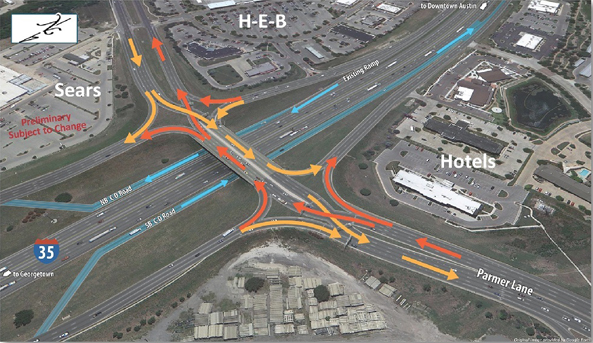